We were in Malmesbury visiting friends this weekend and passed lots of old buildings – including one especially old one with a nice plaque on the front.  As we walked away from it one of the people I was with commented that it was a shaame it was so high up or we would be able to read it.  Well, to a man with a zoom lens on his camera that sounds like a challenge… 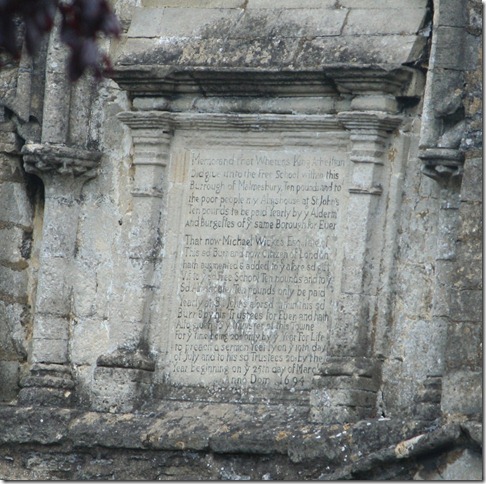 This is my best attempt at getting the text of this odd plaque:

Memorand that Whereas King Athenfran did give into the Free School within this Burrough of Malmesbury, Ten pounds and to the poor people my Almshouse at St John's Ten pounds to be paid Yearly by y Alderm and Burgeffes of y same Borough for Ever

That now Michael Wickes Esq late of This sd Burr and now Citizen of London hath augmented & added to y afore sd gift Vis to y sd Free School Ten pounds and to y Sd Almshoufe.  Ten pounds only be paid Yearly at St John's aforsd within this sd Burr & by his Trustees for Ever and hath alfo given to y Minister of this Towne For y time being 20s only by y Year For Life to preach a sermon here yearly on y 10th day of July and to his sd Trustees 20s by the Year beginning on y 25th of March

My days studying History are a good 10 years of fixing computers ago and to be honest the only relevant thing that can help me here is that “f” can mean “s”, so the word “alfo” is easy to translate.  Oh, and that spelling used to be a bit more optional than it is now, though given the state off Facebook status updates I’ve seen recently it still is.  Anyway, that explains “Burrough”.  It also seems logical that “sd” is “said” (is this 17th century text speak?) and “y” is “the” (it is – maybe plaque carvers charged by the letter) so my best translation is:

Remembering that King Aethelstan gave ten pounds to this school and Almshouse, Michael Wickes (who used to live here and has since moved to London) has added to it another ten pounds a year every year and also another 20 shillings for someone to preach a sermon here each year.  In 1694.

It all seems a lot of fuss over what appears to amount to just over twenty quid and a free sermon.