Mr Tobes is (a terrible) two

Toby has finally turned two this weekend, and we knew about it!  He has been teething again for a week or two anyway, plus starting to get some rather amusing tantrums.  Then on about Wednesday he got a cold, which appeared to develop into full-blown manflu within about an hour.  He had a bit of a temperature and a runny nose, so reacted to this by stopping eating and sleeping and becoming very angry with the world.

Our floors have never seen so much beating of fists.  At one point (protesting about something, though he quickly seems to forget specifically what once he is “in the zone”) he went halfway up the stairs, sobbing, and starting to softly bang his head on the steps.  Scary.

Anyway, he had his birthday presents (I hope he doesn’t think he is being rewarded in some way for this behaviour) and loved them, especially the dinosaurs, of which there were many.  Harriet thought they were great too, being a 4 and a half year old tomboy they were just up her street.  Cue lots of tussling over who was going to play with the baby T-Rex. 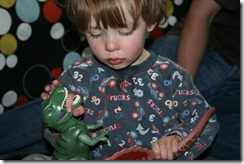 Then we had a teddy bear’s picnic at the park which everyone enjoyed.  Except Toby, who was beside himself in a tantrum haze of anger.  And strapped into his Phil N Teds most of the time to avoid people getting hurt.  The baby dinosaurs ate his share of the snacks. 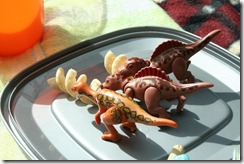 Then more pressies, including a PlayMobil Whale (with researcher boat!), which has quickly become his Favourite Toy Ever (see below, he looks like he is about to kiss it).  Trouble is, when he gets angry and is carrying the whale he is a bit more dangerous than normal, being effectively armed with a club. 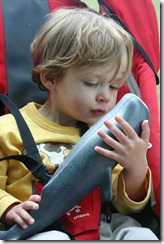 I did my usual job of trying to fake a happy family event by taking pictures from the right angle.  See below the front and back shots of two toddlers lying next to one another.  The front one shows that the birthday boy’s emotions are not what they should be! 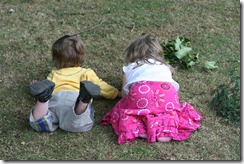 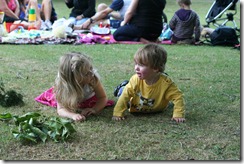