As the tragic and disturbing news story of Raoul Moat going crazy and being on the run in the North of England came to and something even more disturbing happened.  As a sign of the kind of cutbacks we can expect to see over the next few years, the BBC did not send someone so far north to actually film the police operation, but instead clearly faked the photos they used.

In this example taken from the BBC News site on the 10th July 2010 they have used a random guy told to "look like an angry policeman" and given a "gun", though in this case it seems to be a water pistol.  They put a WW2 helmet on him (sprayed black, 'cos police stuff is often black) and with "police" written on it in A-team letters just in case anyone was in some doubt what they were going for. 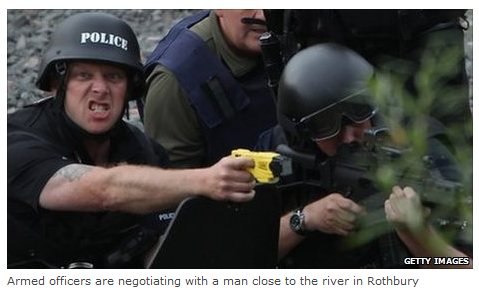