Playing in the park while England lose at Football

In a very sensible use of time and resources we decided to decamp to the local park and listen to the band on a nice hot, sunny and quite deserted summer Sunday afternoon – deserted because everyone else wanted to watch England getting done over 4-1 by the Germans on TV.  I think we had the best idea!

We took bubbles (because everyone likes bubbles) 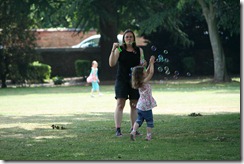 Harriet and Toby played football with a balloon, unaware that there were other, less interesting and certainly less successful, football games going on elsewhere… 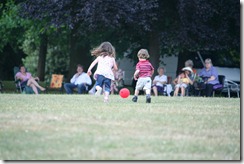 And we admired (and climbed on) the fibreglass lions outside the Museum – part of the Pride of Northampton season apparently (whatever that is). 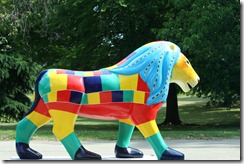 And then we did some running down hills too. 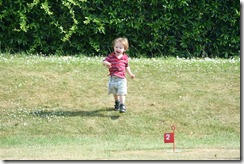 Mum and Dad are on a post holiday diet, so instead of a bottle of bucks fizz or some Tuborg, we made too with a flask of tea, very nice it was too.  And the band on the Abington Park bandstand were marvellous.

Someone still kept coming over from the pub and updating us on the score though!  I guess there’s no escape.