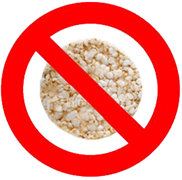 Recently I started what I thought was a commendable attempt to reduce my snacking on chocolate, sweets and (most seriously) biscuits in the office.  This would have many benefits on my weight, energy levels and the number of pointless conversations in the office on which was better - Rich Tea or Digestives?

Anyway, after researching low calorie snack alternatives (its not realistic to just "not eat", or even simply "stop eating when no longer hungry" - that'd never work) I settled on the inoffensive rice cake.  They are cheap, I think they are tasty, best of all they are virtually fat free.

After two days of this new regime I have had to abandon my new snack after what I can only describe as a vicious campaign of hatred and intimidation by my previously benign work colleagues.  Little did I realise how smelly these things were!  I was informed in no uncertain words that I was indulging in an anti-social activity and should stop.

Now that I am aware of the seriousness of this issue, I think action should be taken.  Clearly it would be unfair to just introduce a rice cake ban, but I would like to suggest the following:

Hopefully these simple measures will stop others making the same mistakes as me.